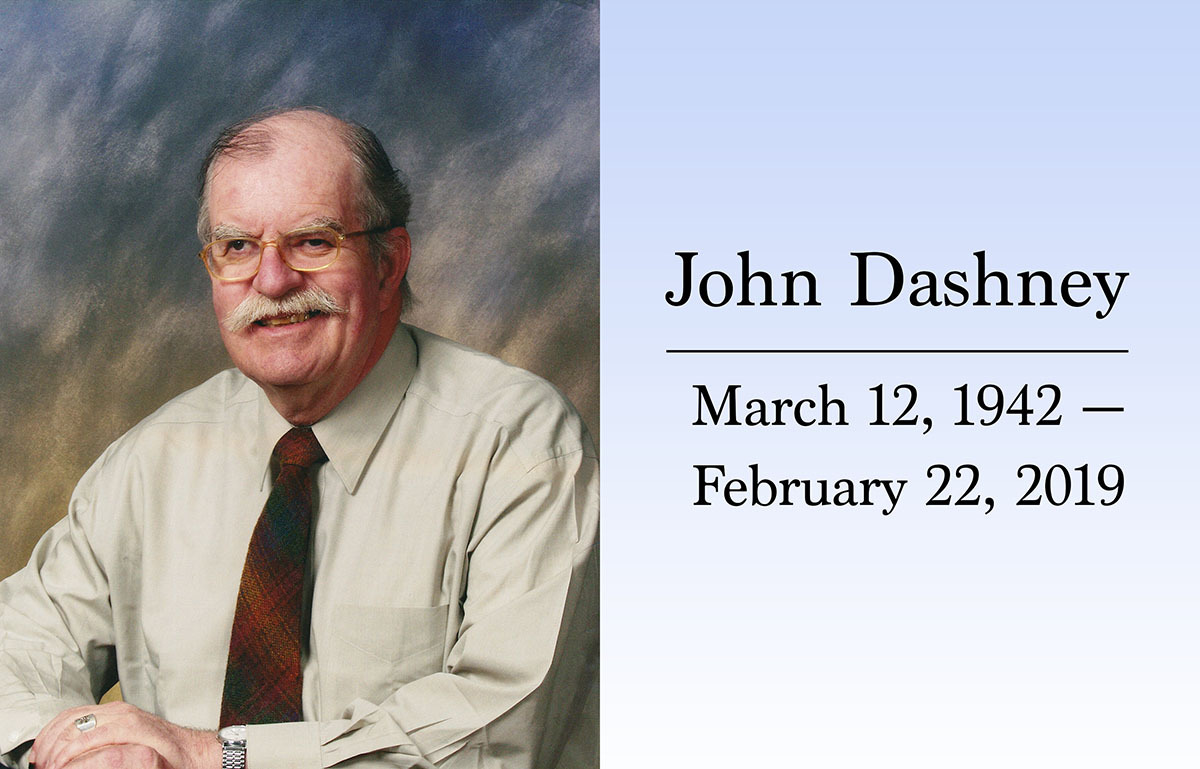 Award-winning Salem author and storyteller John Dashney died Feb. 22, 2019, at 76. John died in Portland following a battle with the flu for a few days. John was born March 12, 1942, in Salem. He received his bachelor’s degree in English and Master of Fine Arts from the University of Oregon.

John’s career as a storyteller began in the late 1970s. He was diagnosed at 13 with retinitis pigmentosa, an inherited degenerative eye disease that causes vision impairment and blindness. When he could no longer see well enough to read to his son, he began making up his own stories instead. “I started to catch on,” his son, Braden Dashney, said. “I told him I liked it better when he made the stories up.”

John began telling stories to his son’s first-grade class at Grant Community School and later began visiting other Salem-area schools as a storyteller. John is known for writing several children’s books including, “The Ballad of Big Ben’s Boots,” “Faces in the Frames,” “Great Galloping Catfish!,” “The King of Messy Potatoes,” “The Last of the Whistler,” “Summer of the Hunters,” and “Walter & Mishka, Parts 1 & 2.” Braden said his father began traveling across the United States, England and other parts of the United Kingdom and to Australia and New Zealand offering to share his stories in grade schools for free.

John was invited to a storytelling conference in Kuala Lumpur, Malaysia. He won numerous awards, including the Ned E. Freeman Excellence in Writing Award from the American Council of the Blind and Dialogue Magazine’s award for Best Story of the Year. His inspirations for his books came from “northwest folklore.” John collected rare books about explorations of the Northwest Territory. “He loved to travel, he loved to read ... he loved track and field,” Braden said of his father. He became a Distinguished Toastmaster for Toastmaster International.

John was severely injured in May 2012 after being hit by a car while crossing an intersection near his home. He suffered a broken back and ribs, punctured lungs, a blood clot on his kidney and a large laceration to the back of the head.

I first met John Dashney when I first joioned Friends-in-Art of ACB in 1985. I remember how amazed I was at his performance talent as well as the quality of his writing. He and I also both contributed to Si FI See, a recorded science fiction, publsihed by some blind ACB members back in the 80s. (John did not write hard science fiction, but his talen for fantasy and whimsy was unparalleled.)

A few years later, in teh early 1990s, I invted John to be the national speaker/entertainer at our State affiliate convention. Our convention was in Great Bend, Kansas that year, which is a long ride across the Kansas praire from anywhere airplanes land. John got to ride across a goodly piece of KAnsas with a van full of local blind and low-vision folks, and it was one of the most pleasant and entertaining cross-state trips I have ever taken. When we got the Great Bend, some folks in our local chapter said that it was too bad we had not scheduled John to entertain at some of the local schools. Actions were taken, and arrangements were quickly made, and before John could get his land legs under him, he was whisked off to entertain the third-grade classes at the Great Bend elementary school. He was then whisked back to the hotel to entertain at our banquet. John was in his element. He loved it and his great spoirit was infectious.

I have continued to admire John and his wonderful written works and presentational talents throughout the remainder of our lives together as fellow ACB and FIA members. John had the great ability to be relevant and funny without needing vulgarity or off-color references. One of the great things about his work is that he will be able to present it before the good Lord him or herself at some of his/her social events, and that is a good thing. With all of the tough stuff the great deity has to ride herd over, he/she probably needs a good laugh or two, which John will be able to provide.

Storytelling is becoming a lost skill, and John was a really good storyteller.

Anyone who ever heard John tell his stories will agree with that statement. John shared these unique, humorous and unforgettable tales in venues throughout the world, through his performances on FIA showcases, and on cassette and CD recordings which have now become treasures to those who own them.  In addition to recordings, John was the author of several books for children and adults. Armed with his materials in audible and print formats, he was a fixture at the FIA table in the exhibit hall for the many years he attended the conventions. My late husband and I had the pleasure of working at the FIA table with John and were thus able to observe him in action as he dealt with his adoring fans who always flocked to the table to make a purchase, or just talk. Ever friendly and courteous, he often went out of his way to provide assistance to us, or to help someone locate another exhibitor. He always included a personalized autograph on any of his merchandise. In his presence and through his stories, John shared his wisdom, his selfless nature, and his unparalleled sense of humor.  In his memory, may we all strive to do the same.