Finding the Crosswalk and Aligning to Cross: Part 2

Part 2: Additional modifications to help with finding crosswalks, aligning, and staying within the crosswalk

Throughout this article, whenever possible, the authors have provided references to the most relevant supporting statutes, proposed statutes, research work, and other source material to assist the reader’s understanding of the information to be covered. The existing and proposed statute references cited in this article are from the: 2009 edition of the Manual on Uniform Traffic Control Devices for Streets and Highways (MUTCD), 2010 ADA Standards for Accessible Design (2010 Standards), and (Proposed) Public Rights-of-Way Accessibility Guidelines (Proposed PROWAG).  All references are current and accurate as of the posting of the two parts of this article and are intended solely as informal guidance.

The following words and phrases in this two-part article shall have the following meanings:

In the intervening 10 years since this article was originally posted, there have been numerous research studies performed contributing to the development of new orientation and mobility strategies and environmental modifications for assisting pedestrians with vision disabilities (PWVDs) in locating street crossings an aligning to cross. This article has been updated to reflect some of these advancements by being transformed into a two-part format comprised of original, revised, expanded, and new content.

The first part updated the description of cues and strategies used by PWVDs for finding the crosswalk and aligning to cross, including discussions of challenges associated with these tasks in the modern urban environment in which intersection geometry is continuing to evolve.  Some possible modifications that may help with each of these tasks were described.

Additionally, the part included a short section on how to advocate for modifications that have been proven effective in addressing street crossing challenges. Also, a reference list was provided with the information necessary for the reader to locate and retrieve any source that was cited in the body of Part 1 of the article.

This second part is a new addition to the article which provides descriptions of four modifications that recent research has shown may be very effective in helping with the following problems:

This part concludes with its own reference list and a footnote.

How can the PWVD avoid having trouble finding crosswalks at mid-block crossings, or crossings at roundabouts or at channelized right turn lanes?

A 24-inch-wide (609.6 mm) strip of raised bars extending across the sidewalk, ending at the curb, beside the detectable warning surface (DWS), has been found to be very effective (Bentzen et al., 2017, 2020).* The bars should be oriented perpendicular to the direction of travel across the crosswalk, so that the PWVD can accurately square off with them under foot in the same method as when squaring off with a curb which they know is perpendicular to the direction to be crossed.  The bars should be beside or behind the end of the DWS truncated domes farthest from the center of the intersection, not running right down the curb ramp and connecting with the domes (MUTCD Sections 3B.18 paragraph 18, 3I.06 paragraph 1; 2010 Standards Section 705; Proposed PROWAG R208, R305, R306.3.1).  In this way, pedestrians with mobility disabilities don’t have to encounter them when traveling up or down a curb ramp.

This photo shows the raised bars across a sidewalk at a mid-block crossing, ending at a gutter, beside the DWS. 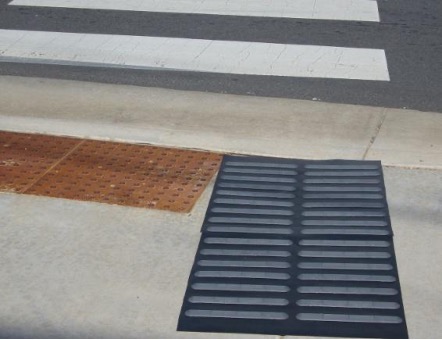 What can be done to assist the PWVD to avoid having trouble aligning to cross where parallel traffic is absent, intermittent, or misleading?

At non-corner crossings, such as at mid-block, channelized turn lanes, or roundabouts, the same 24 inch (609.6 mm) wide strip of raised bars with the bars aligned perpendicular to the crossing direction, will help the PWVD find the crosswalk and align to cross.

At corner crossings, a 24-inch (609.6 mm) by 24-inch (609.6 mm) square of raised bars oriented perpendicular to the direction of travel on the associated crosswalk, installed beside a DWS, on the side farthest from the center of the intersection has been found to significantly improve the alignment of research participants who had vision disabilities in four cities (Bentzen et al., 2017, 2022).* Having the raised bars extending all the way across the sidewalk at corner crossings was not helpful.

This photo, taken at a 4-way skewed intersection in Seattle, shows 24-inch (609.6 mm) by 24-inch (609.6 mm) squares of raised bars installed beside the truncated domes at the bottoms of the two curb ramps serving the two crossings from the closest corner.  One of the curb ramps at this corner slopes toward the center of the intersection.  There is no traffic that is exactly parallel to either of the crosswalks.  The bars are oriented perpendicular to the direction of travel on the crosswalk.  The squares of raised bars are on the flares of the ramps, on the side of the truncated domes that is farthest from the center of the intersection. 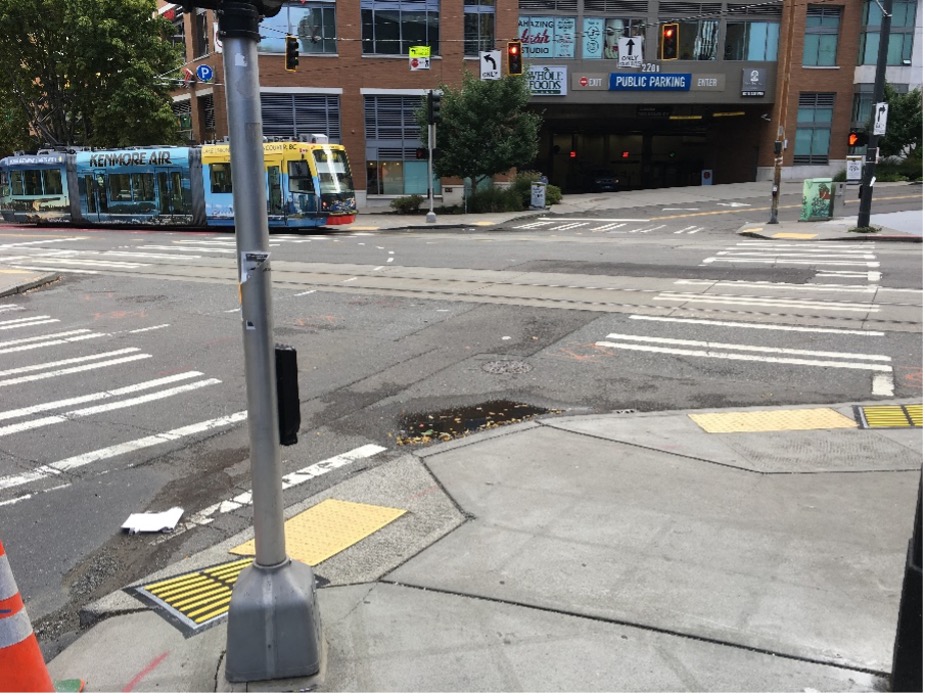 At signalized crossings, what can be done to assist the PWVD to avoid having trouble crossing straight at very wide crossings, or where there is no or inconsistent traffic going parallel to their crossing direction?

The MUTCD defines accessible pedestrian signal (APS) audible beaconing as “the use of an audible signal in such a way that pedestrians with visual disabilities can home in on the signal that is located on the far end of the crosswalk as they cross the street” (MUTCD Section 4E.13 paragraph 4).  Also, the MUTCD requires that the audible beaconing be called up by special actuation, rather than the APS functioning in the louder mode all the time. The recommended form of special actuation is an extended button press (holding the pushbutton in for over one second).

Far-end “Beaconing APS” significantly improved the ability of research participants in four cities to cross within the crosswalk (maintain an initial heading without veering) (Barlow et al., 2013; Scott et al., 2014).* There is only one kind of beaconing APS that helps, although several APS modifications intended to assist with this problem were tried, and remain in the 2009 edition of the MUTCD, sections 4E.09 paragraph 10, 4E.11 paragraph 9, and 4E.13 paragraphs 4 – 8. The next edition of the MUTCD is expected to describe only the far-end “beaconing APS” that has been found to actually help.

This is a description of how the beaconing APS works, from the traveler’s perspective.

The three companies that currently manufacture APS complying with the MUTCD — Polara, PedSafety, and Novax Industries — all provide the technology for this type of effective APS beaconing, though, as of the date of this publication, they don’t market it as a specific product. Parts must be ordered separately and then installed correctly.  The technology is not installed properly if it doesn’t perform in the way described above, and the PWVD should request that it be adjusted to give them information in the way that has been found to work best.

At unsignalized crossings, what can be done to assist the PWVD to avoid having trouble crossing straight at very wide crossings, or where there is no or inconsistent traffic going parallel to their crossing direction?

A raised tactile guidestrip can be a useful means of assisting a PWVD in making a straight crossing within the crosswalk at unsignalized crossings. The guidestrip is placed near the edge of the crosswalk marking that is farthest from the center of the intersection. Research by Barlow et al. (2013) found that a guidestrip enabled accurate crossings in 3 cities (Barlow et al., 2013). * This strip can be followed with a long cane.

The guidestrip used in the research was a temporary traffic marking tape that was ¼ inch (6.4 mm) thick (raising it above the roadway pavement), 6 inches (152.4 mm) wide, and it had a smooth texture. A more durable product having similar dimensions might be preferred by the traffic engineer.

The engineer will prefer a product that is durable under sustained traffic use, variable weather conditions, and one that is not too noisy as vehicles pass over it.  The PWVD should ask the traffic engineer for the opportunity to try a sample of the proposed material in an installed application to be sure it is one that is easy to follow. If the guidestrip’s profile is rounded, or slopes up and down, the PWVD’s cane may slide across it too easily, and they may not be able to locate it in the crosswalk.  If the surface of the strip is very rough, the PWVD’s cane may stick in it as they try to follow it.

The sound made by vehicles crossing the crosswalk guidance strip can help the PWVD locate this wayfinding device. Nevertheless, the individual should be sure to find the strip with their cane before starting to cross.

Although engineers may think there should be crosswalk guidance strips on both sides of the crosswalk, so PWVD can travel between the transverse lines, Scott et al. (2011b) found that PWVD crossed more efficiently when there was a single guidestrip placed within the crosswalk that can be followed for the entire length of the crosswalk.

In California, where there is a history of the use of tactile guidestrips, PWVDs report their preference for the aid to be: a) 4 inches (101.6 mm) wide and 1/4 inch (6.35 mm) high, b) placed in the center of the associated crosswalk, c) a minimum 70 percent visual contrast with the crosswalk pavement, and d) identical in color with the associated transverse crosswalk lines for the following reasons:

When installing a tactile guidestrip, this should be performed under the joint supervision of a traffic engineering specialist and Certified Orientation and Mobility Specialist, as well as the involvement of the PWVD making the request for the device.

It is important to remember that guidestrips are for guidance and to assist the PWVD in making a straight line of travel within the crosswalk. They should not be considered as a panacea nor as a means of guaranteeing safety.  Used properly, the guidestrip can be a useful aid to PWVDs.

U.S. Department of Transportation, Federal Highway Administration. (2009 edition, including Revision 1 dated May 2012 and Revision 2 dated May 2012). Manual on uniform traffic control devices for streets and highways.

* Accessible copies of these publications are available from [email protected].

Part 1 article on Finding the Crosswalk and Aligning to Cross