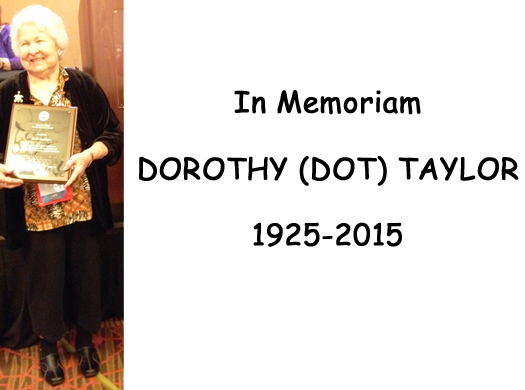 Dot Taylor was probably the most popular member of the Tennessee Council of the Blind due to her many years of attending national conventions and the assistance she cheerfully provided to so many of us.

I met Dot in 1972, when she was the manager of a bowling alley.  She originally worked with deaf bowlers, wheelchair bowlers, and then became involved with our blind bowling league as our coach.  She kept all of our statistics and drove our team to tournaments in other states.

Dot was always an energetic, athletic woman.  She participated in the Senior Olympics on the city, state and national levels for many years.  She excelled in several sports including table tennis, discus throw and shot put.

For many years she participated in three bowling leagues a week, and I’m sure she received many trophies.
Dot began attending our state conventions in the early 80’s and provided transportation for the Memphis chapter.  She always assisted my first husband, B.H. Newman, with the auction.  She would describe items and pass them to us so we could examine them.  As our state treasurer, she kept track of the items and made sure we paid for them.  After B.H.’s death she often served as an auctioneer.  Dot was also our parliamentarian for many years.  She received the Ann Kienzle award at one of our state conventions in recognition of all of the things she did for us.

Another of her activities was the Memphis Rescue Squad.  This group performed basic first aid and handed out water at large public events.  The busiest one occurs every August at Graceland.  Dot always referred to it as “Dead Elvis Week.”
In the late 80s after her husband’s death, Dot became more involved with us.  From then until her death, she was an active volunteer, taking members grocery shopping, to the mall or to the doctor.  She would visit anyone who was in the hospital. She was always encouraging and supportive and would tell us that we could do anything except read print and drive.  When computers became available, she said all that was left was driving.  I wonder what she thought of self-driving cars.

Dot attended her first national convention in Greensboro, North Carolina, in 1995.  She attended all but one convention from that time until her death.  Dot was so well regarded that a collection was taken nationally to purchase a life membership for her, and more money was raised than was actually needed.  Everyone loved Dot for her tireless assistance, always offered with warmth and kindness.  In the last several years, Dot had to use a scooter, but it didn’t slow her down much.  Dot’s train was often seen, with someone holding onto the scooter and several more people following along behind them.

At the convention in Dallas last year she celebrated her 90th birthday at the banquet and received the James R. Olsen Distinguished Service award and a standing ovation.  This is one of the most prestigious awards given by ACB and is not always given each year. I think that’s the only time I’ve seen her speechless.

Dot passed away in December after a brief illness.  She is survived by her daughter, Patricia McSwain of Memphis, and her son, Adrain Taylor of Georgia, as well as several grandchildren and great grandchildren. She will be missed by hundreds of ACB friends.
* *
ACB Angel Memorial Tribute - Dorothy (Dot) Taylor