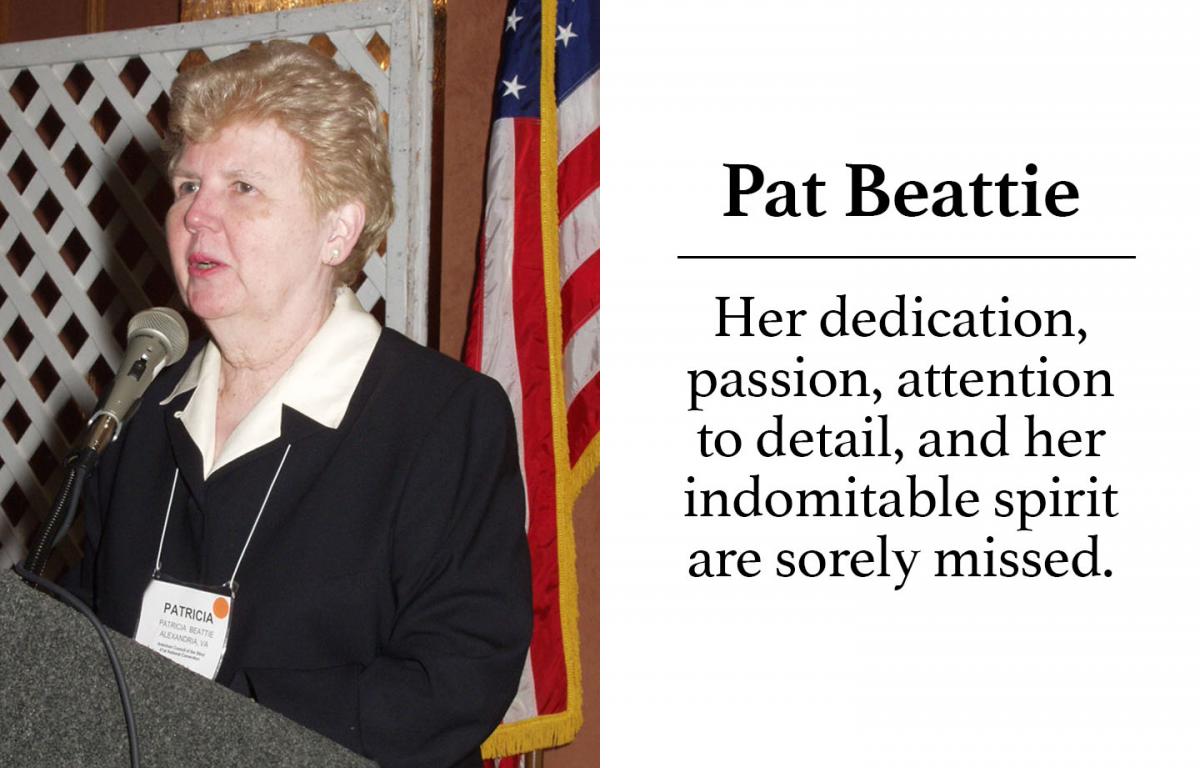 Pat Beattie’s strong involvement with ACB began in the fall of 1982 when she moved to Virginia to accept a position in the Mid-Atlantic regional office of the American Foundation for the Blind. She was designated to serve as a consultant to rehabilitation agencies serving blind and visually impaired clients and to blindness consumer organizations. She arrived in Virginia at a very auspicious time, as a state legislature study commission had just recommended consolidation of what was then the Virginia Department for the Visually Handicapped with the generic rehabilitation agency. While the Old Dominion Council of the Blind and Visually Impaired (ODCBVI; now ACB of Virginia) had several skilled advocates in leadership positions at that time, we were all to get a very quick education in effective advocacy techniques and strategies from Pat Beattie. Pat was certainly a pivotal contributor to ODCBVI’s success in defeating the consolidation initiative. Then the political landscape in Virginia became even more interesting and consequential one year later when a bill to promote the rights of all disabled Virginians was introduced into the state legislature. After two years of cross-disability advocacy efforts in which ODCBVI played a significant role, the Virginians with Disabilities Act was passed in 1985, a piece of legislation which can fairly be considered to be the forerunner of the federal Americans with Disabilities Act.

In 1989, Pat accepted a position with the Rehabilitation Engineering Society of North America, where she was again placed in positions which enabled her efforts to achieve positive benefits for blind and visually impaired persons, particularly in the area of environmental access. Here again, she assumed this position at a very propitious time as the federal Americans with Disabilities Act (ADA) was enacted in 1990. The ADA assigned responsibility for developing accessibility guidelines to the Architectural and Transportation Barriers Compliance Board (the Access Board), which then convened an advisory committee to assist in the development and promulgation of accessibility guidelines, subsequently known as the ADAAG. Pat’s work on the signage subcommittee respecting braille and raised large print characters was a great contribution in facilitating environmental access for blind and low-vision persons. She was also appointed to serve on a number of advisory subcommittees of the American National Standards Institute (ANSI). Pat would always come well prepared to any committee meeting, making herself intimately familiar with all aspects of the issue at hand. Consequently, her informed views would inevitably be sprinkled throughout the committee’s reports and recommendations.

In 1993, Pat accepted a position with National Industries for the Blind (NIB) as its Director of Policy and Governmental Affairs, which afforded her yet another opportunity to influence positive outcomes for blind and visually impaired persons. She worked tirelessly, both publicly and behind the scenes, prodding NIB to take more progressive positions, especially with respect to payment of wages to its single-disability blind workers. She also championed an upward mobility program which provided increased training and mentoring opportunities to blind production workers, thereby enabling their transition to responsible management positions.

Pat served on ACB’s board of directors from 1988 until 2001, the last six years as treasurer. During both her tenure on the board and in those years where she chose not to hold any leadership positions, Pat was always generous with her time, and she particularly enjoyed mentoring new ACB members. Her dedication, passion, attention to detail, and her indomitable spirit are sorely missed, but she leaves us with a shining example of what a true blindness advocate can and should be.