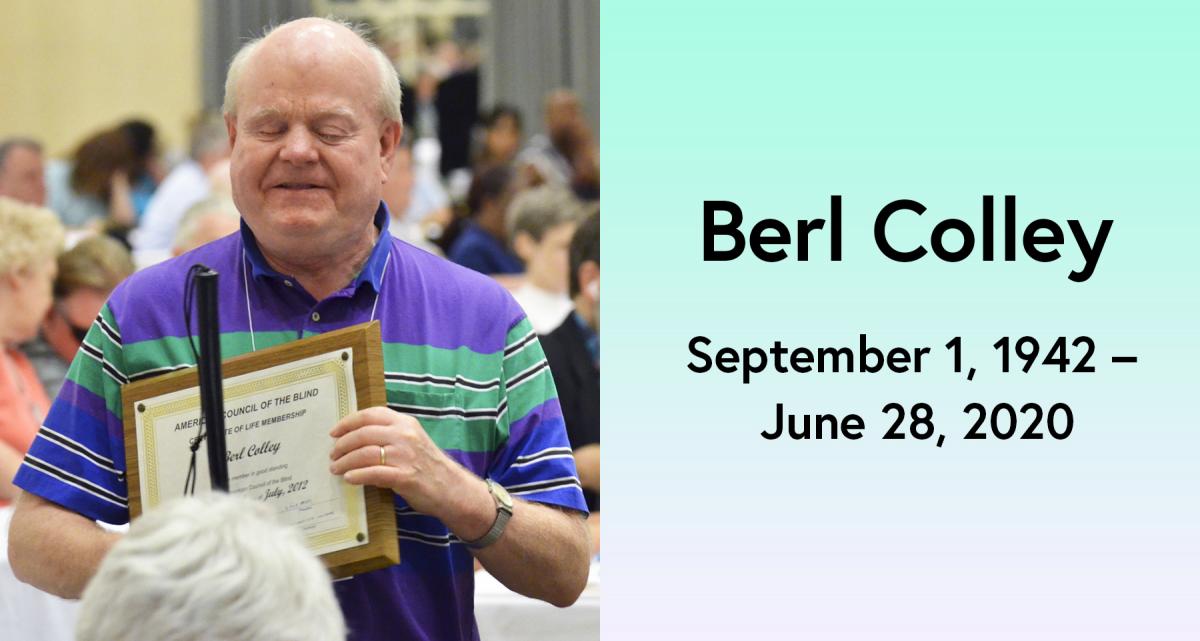 “According to Ralph Waldo Emerson,” Berl Colley told a gathering of students at the Department of Services for the Blind’s Orientation and Training Center, in Seattle’s Columbia City, “What lies behind us and what lies ahead of us are tiny matters compared to what lies within us. In other words, it’s what we do with what we got.”

Another time, at a Washington Council of the Blind (WCB) convention, Berl overheard a group of young blind members complaining about the barriers created by blindness. “If we see them as obstacles,” he told them, “they will defeat us. But if we see them as opportunities, we can work together and find solutions.”

Berl Colley, quiet and unassuming, saw his contribution to the blind movement as that of a motivator, always leading the discussion back to what the individual could contribute to the Movement. “We are only as strong, as successful as our individual members,” he said.

After graduating high school from Washington State School for the Blind, Berl attended college at Washington State University. After obtaining his degree, he became a software developer. He worked for the state for a few years, working for Washington Library Network until he retired.

As Berl became more and more involved in the blind organization, it seemed that he lived on board a Greyhound bus, heading from Olympia to Seattle, to Spokane, to anywhere blind people gathered and where he could promote his belief that it takes strong individuals in order to have a strong organization.

Locally, during the late 1970s, he was director of a client assistance project, serving the Washington and Oregon Commissions for the Blind. Over the years, he was involved with the Intercity Transit Advisory Board Committee. He was president of the Washington Council of the Blind, as well as president and treasurer of Capital City Council of the Blind, where he was honored with a lifetime membership award. For decades he was involved with Thurston County’s Toastmasters chapter. In January of 2016, Governor Jay Inslee officially appointed him to the Board of Trustees of Washington State School for the Blind. The last several years, he was involved with the Thurston County auditor’s office on the Voting Accessibility Advisory Committee, working to make voting accessible to all independently. He also worked diligently with city and county officials, to make all crosswalks in Olympia/Lacey into talking crosswalks.

Nationally, Berl was a member of American Council of the Blind. In 2012, in recognition of his many services, he was awarded a lifetime membership. Berl served on the ACB Board of Directors for eight years. He chaired the DAISY Conversion Committee, the Idaho Task Force Committee, and the Leadership Institute Committee. He was on the ACB Budget Committee for three years. He co-chaired the Resource Development Committee for several years, as well as co-chaired the Health Issues Task Force. He was involved in the Technology Resource Management Committee and the Walk-A-Thon Committee. He was most proud of his five years as ACB’s national tour coordinator. He also served for many years on the Amtrak Customer Advisory Committee (ACAC).

Getting to know folks, taking time to discuss and exchange ideas ... this was the formula Berl used. Was it effective? Here are the thoughts of the current WCB president, Julie Brannon.

“I first met Berl Colley during the 2000 WCB convention. A soft-spoken gentleman, he began talking to me, stating that he’d heard I was interested in membership development for WCB, and that was also of particular interest to him.

“In subsequent conversations, talking about WCB, Berl truly was the first person who assisted me in a real understanding of the organization, its roots and its differences from the National Federation of the Blind (NFB). Berl had been involved in both ACB and NFB, and had a very practical, keen understanding of both organizations, their similarities and differences, and the reasons for them.

“Berl then asked if I’d be interested in running for a WCB officer position. I was a bit nervous, never seeing myself as being involved in that way, but I subsequently ran, and was elected second vice president in 2002 under Berl’s presidency.

“After that, it continued to be a learning journey under that quiet, strong, and consistent mentorship that Berl so well provided. Under Berl, the organization grew in strength, membership growth and pride. Thank you, Berl, for being a great friend, mentor and all-around lover of people and WCB!”

We close with the words from Berl’s daughter, Crystal Colley Dull:

“My dad was my moral compass. He was an amazing man. He was kind, generous, loving, noble, quick-witted, and humble. He had a gentle soul full of light. He was a wonderful father, teaching me to ride a bike, swim, shoot hoops, play softball, racquetball, bowl, and so much more. He loved to swim and go on walks. He loved to listen to music and sports games. I don’t think he ever went a day of his life not listening to some kind of game.

“He loved adventure and exploring — especially historically. He loved to travel, and had been on 16 cruises, taking him all over the world. He told me recently, that he especially loved being on the water during a storm or rough waters.”

A fitting closure, an image of Berl Colley raising his arms as he calms the troubled waters. Thank you, Berl. A job well done.