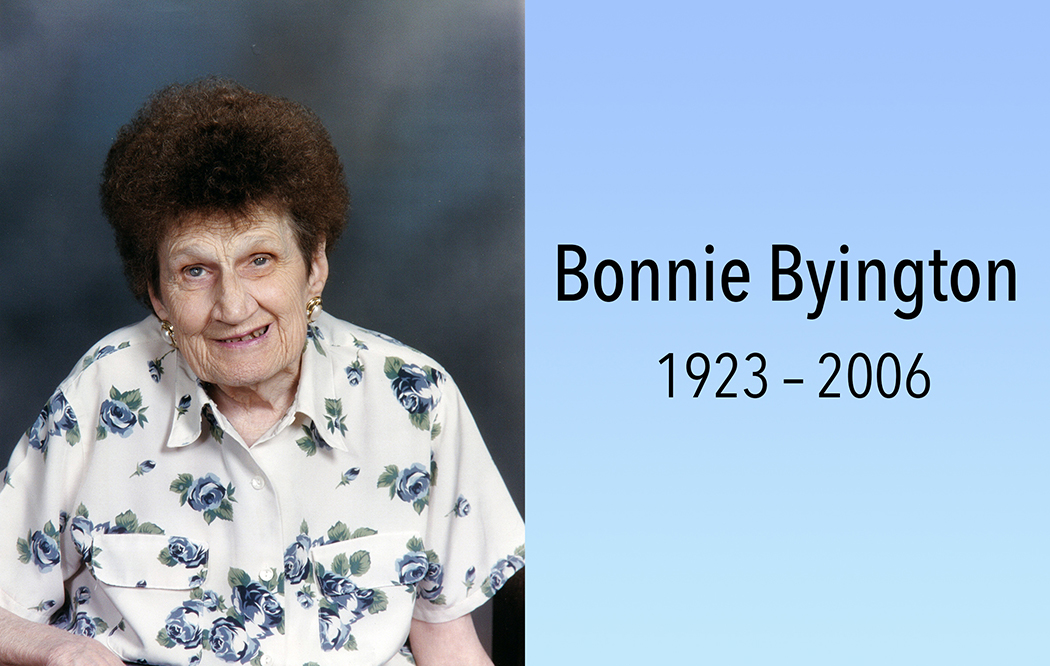 My mother, Bonnie Byington, was a charter member of the American Council of the Blind (ACB). She was born in 1923, and died in 2006.

Bonnie was the convention coordinator for the 1967 ACB convention. Bonnie did not remain consistently involved at national levels. She was, however, always deeply involved with the Kansas ACB affiliate.

Bonnie was born on a Kansas farm in 1923. She had low vision from birth and was unable to use printed materials. Her parents sent her to the Kansas State School for the Blind in 1931. She graduated in 1943. Bonnie then attended Kansas State University, graduating with a B.A. in journalism in 1946.

She worked toward a master’s in social work at the University of North Carolina, but was hired away from this pursuit to become a social worker for the blind in that state.

Bonnie, however, stumbled onto the fact that one of her bosses was embezzling state funding. She turned her boss in, and investigators eventually told Bonnie that they were uncovering graft at high levels, and for her safety, she should quit her job and leave the state. She left North Carolina quietly, and returned to rural Kansas. She was told that she would be subpoenaed when her testimony was needed. The subpoena never came. Later she learned that a local news story reported her death in an automobile accident.

She then found part-time work writing for a rural newspaper in Kansas. It was not a great job, but it gave her a forum and got her some literary notice. She was able to use this to get a trial at “The Wichita Eagle,” at that time the largest newspaper in Kansas. When the Eagle learned that she was blind, however, the trial was one which would be illegal today. They said that they really did not know if a blind person could do anything, so they gave her three months to prove herself.

At the end of the trial, the managing editors said that she had done well, but said that all of their full-time reporters had a regular beat, and that they could not give a blind person a beat. She might miss too much. They offered her permanent, half-time employment as a fill-in reporter. She asked if she could have until the next day to consider the offer, and they agreed.

She then left the office and took a long walk. She had a lot to think about. There was no safety net at that time. Could she make ends meet?
As she walked and thought, she realized that she was in an unfamiliar neighborhood. She was not concerned. She knew she could retrace her steps.

She eventually smelled a newspaper! Newspapers of the late 1940s had quite an odor due to the printer’s ink. Bonnie thus walked, and sniffed, and finally came to the newspaper building. She could not see to read the sign saying what newspaper. She discovered an alcove by the front door, so she stood in it until the door opened as the receptionist answered the telephone. She heard, “Labor Union Press.”

Armed only with this information, she went in, asked for the managing editor, and inquired about half-time work. She explained her situation with the Eagle. It was such a unique story, the guy decided that if she had the chutzpah to be standing before him, she was worth a shot. He hired her on the spot for the half time that the Eagle would not be using her. As they were a smaller operation, he said she would have many beats.

That is how Bonnie came to be employed at two competing, newspapers for a period of three years. Eventually, she scooped the Eagle on enough stories that they offered her full-time employment. She resigned at the Labor Union Press and worked for the Eagle full-time for a few more years until she quit because she had gotten married and was pregnant with me.
Bonnie continued to work off and on in a number of different professions. She worked for two suburban newspapers, sold encyclopedias, administered a share-a-ride program, and owned a food truck. Her life was a series of firsts.