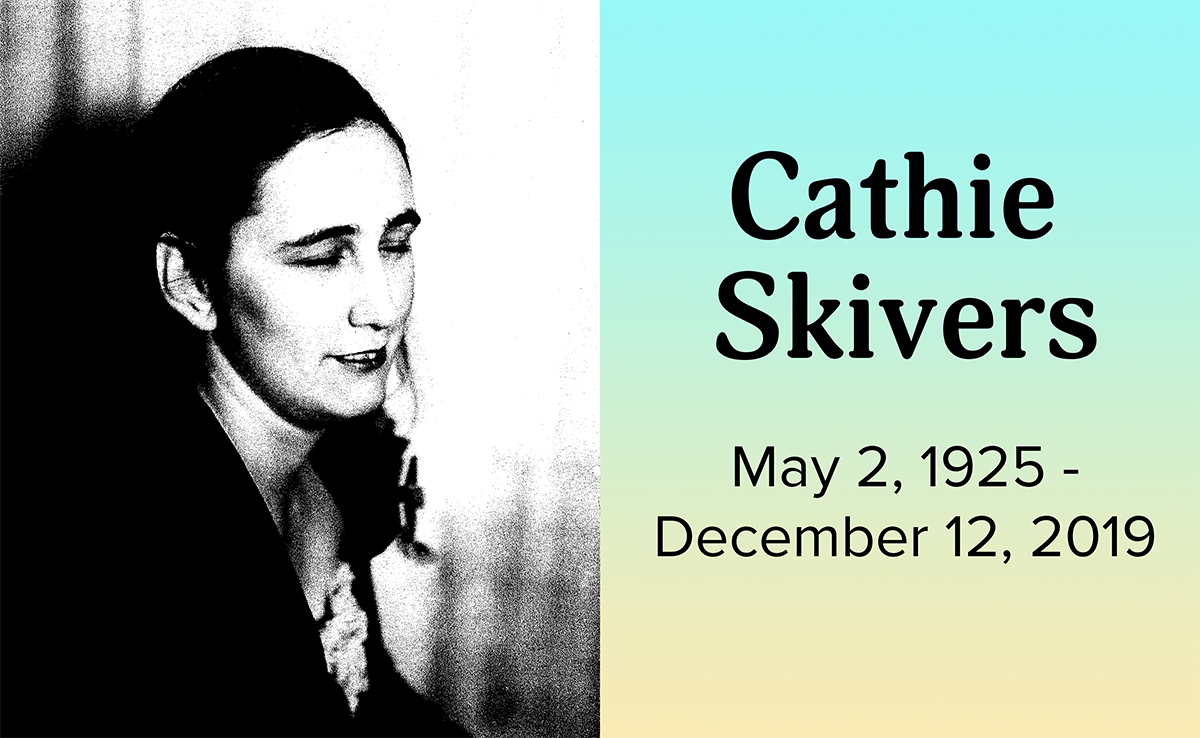 Catherine (Cathie) Winchell was born May 2, 1925 in St. Louis, Mo. An early childhood illness caused her to become blind and she was educated at the Missouri State School for the Blind. She enjoyed her time at the school and said it was more beneficial than life with her family would have been. She said that the students were given tickets to the symphony and the opera all the time.

While still at the school, she secretly married her fellow student, Don Swartz. After leaving the school, they had two sons and moved to California, arriving in the San Francisco Bay area in October 1948. These two sons, Gary and Don, are in their 70s now.

During this period, besides her work as a receptionist at OCB, she started a business selling products made by blind people and played piano in restaurants. She said that she thought some people who saw her riding home on BART at 2 a.m. in a cocktail dress might have had the wrong idea about her profession.

Cathie became quite active doing legislative work for the Council of the Blind, and that work intersected with her piano playing. She tells about a member of the legislature asking her to play “I’ll Take Care of Your Cares.” He sang the first line, “I’ll take care of your cares for you,” and she chimed in singing, “just make sure that our bills get through.”

In 1957, she married Jack Skivers and four more children came, two of whom survived, Darryl and Eric. She kept on getting more and more involved in the blindness organizations, and when a split came in 1961 and the American Council of the Blind was organized, she became a leader in ACB. She served on the ACB board from 1965 through 1976 as director and then secretary.

In 1972, Cathie became one of the pioneers who participated in a special training program for blind people to work at the Internal Revenue Service. After training in Little Rock, Ark., she came back to Oakland to work at IRS. She was there for 17 years before retiring. She received promotions and even served as a union shop steward there.

After her retirement from the IRS, Cathie devoted a tremendous amount of energy to the California Council of the Blind and to its Bayview Chapter. She served as president of both groups part of the time, but whether she was president or not, the chair she occupied was the center of things.

For the last few years, Cathie has just been running down slowly. She had cancer and some other health problems that just finally got the best of her, although she was active and interested in the organizations and her friends and family until the end. Finally, on the morning of December 12, 2019, we got the phone call that we knew would come, but hoped it wouldn’t. It was her son Eric, telling us that Cathie was no longer with us.