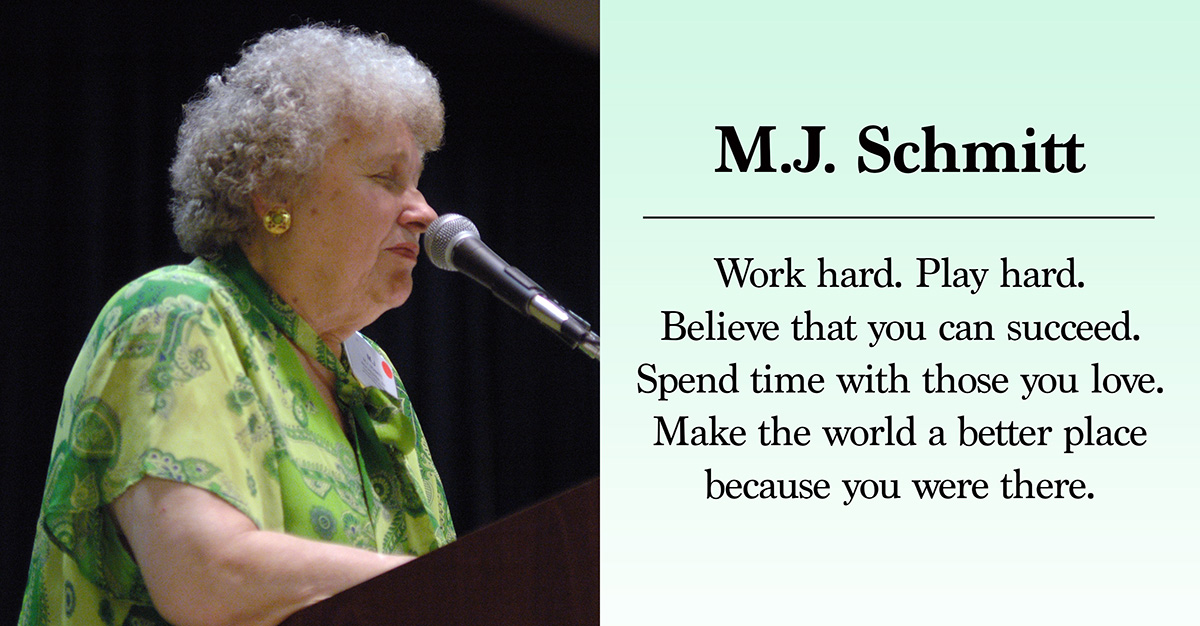 M.J. Schmitt, a founding member of ACB, has fought her last (and perhaps her very hardest) battle. The courage, determination and passion that were her trademarks have served their purpose and are no longer needed. M.J. is at peace now, and we are grateful for the legacy she has left behind.

M.J. was a tireless champion for the rights of blind people. In the early 1960s she greatly benefited from the mentoring of Durward McDaniel, George Card and other early ACB leaders. Later M.J. became an invaluable mentor to several generations of ACB leaders. She didn’t miss a national convention in 50 years, often bringing her two children with her, particularly when they were small. M.J. held offices at the local, state and national levels of ACB. She maintained high standards of excellence as a mother, an ACB officer, and a full-time employee in private industry (she was the first blind computer programmer hired by Sears), while still finding time to cheer for her beloved Dodgers and to celebrate good times with her many friends.

Before balance in life became a goal, M.J. forced her life into balance by the sheer power of her indomitable determination to succeed. M.J. fought hard not only for herself but for every other blind person as well. She never forgot that her successes and the impressions she presented would affect other blind people. Throughout her life M.J. worked tirelessly to ensure that other blind people would benefit from the challenges that she had overcome.

M.J. was born, married and raised her children in Rochester, N.Y. She would be so glad that, after 55 years, ACB has returned here for this 2019 convention.

Throughout her life M.J.’s message remained the same: “Work hard. Play hard. Believe that you can succeed. Spend time with those you love. Make the world a better place because you were there.”

Rest in peace, M.J. You will be sorely missed. We won’t forget.