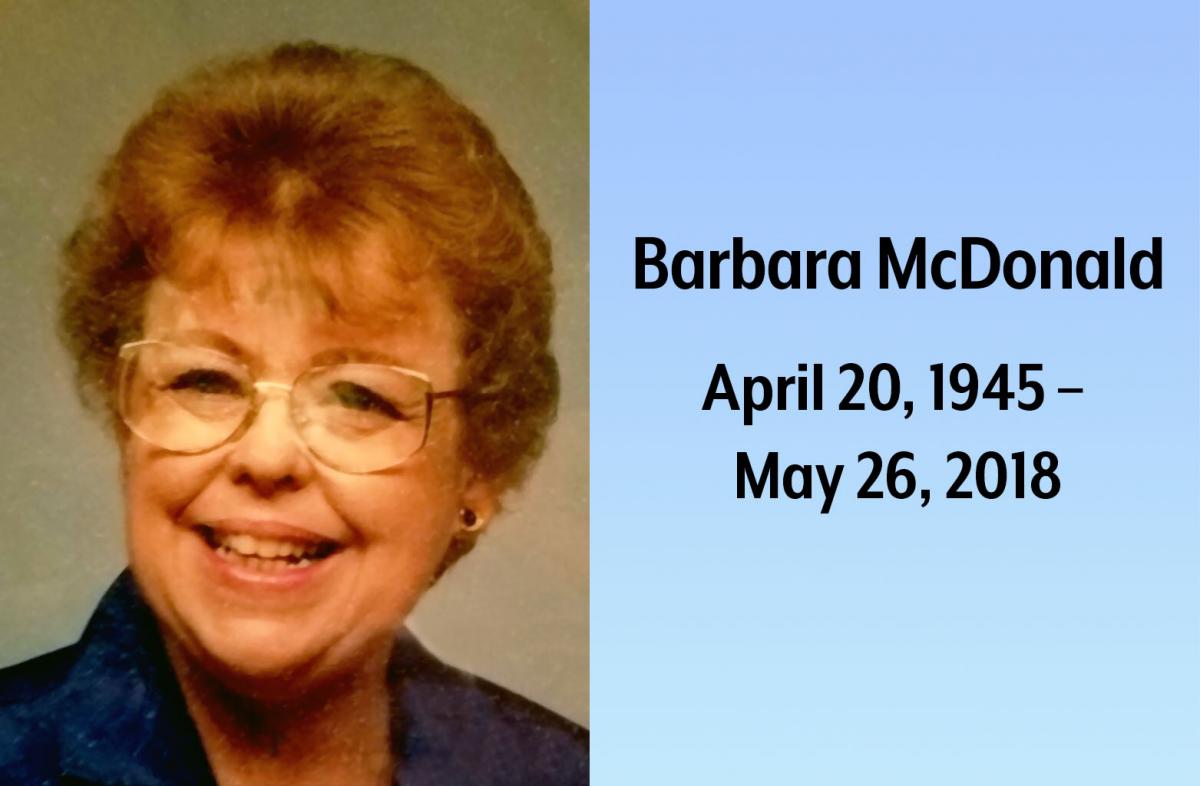 In the late morning of Saturday, May 26, 2018, members of the Arizona Council of the Blind, (AZCB), received the very sad news that one of its most valued members had passed away unexpectedly. Barbara described herself as a daughter, sister, wife, mother, grandmother, Catholic, Irish, English, French Canadian, and Pennsylvania Dutch with a pinch of German. For anyone who knew her, particularly those of us in AZCB, we would add that she was a leader, teacher, mentor, advocate, and inspirer with a seemingly boundless level of energy, dedication, and commitment to advancing the rights and interest of those with disabilities.

Barbara was born in Canada on April 20, 1945. Her family moved to Phoenix when she was 8 years old. After graduating from St. Mary’s High school, she married Richard McDonald in 1967, moving to Chicago shortly thereafter where they lived for 23 years while raising their sons, Richard and Sean.

Barbara graduated from Northeastern Illinois University in 1981 with a degree in elementary education and a minor in math. She taught in the Chicago Catholic Diocese school system until the family returned to Phoenix in 1990. It was at this time when Barbara developed kidney disease which ultimately necessitated dialysis treatments. Despite this health challenge, she resumed her career as a third/fourth grade teacher in the Roosevelt School District.

Subsequent to a kidney transplant in 1995, Barbara contracted a viral infection which attacked her immune system, resulting in her becoming legally blind that same year. Despite this further setback, with assistance from vocational rehabilitation, she continued teaching until her retirement in 2006.

In 1996, one year after losing her vision, Barbara learned about AZCB, and joined immediately after attending its state convention in May of that year. She was elected secretary in 1997, serving in that position until 2007 when she became first vice president. She served as president from 2008 to 2010, and continued serving on the board in both officer and directorship positions until her passing. She also served as president of, and held various leadership positions in, 2 local AZCB organizations, the Maricopa Club and the Phoenix Chapter. In 2017, she was instrumental in facilitating the merger of these chapters into the Central Arizona Council of the Blind.

On a personal note, having only relocated to Arizona in June of 2015, I did not enjoy the opportunity of working with Barbara for nearly as long as many other AZCB members, but she quickly became my right-hand person as I began to take on leadership responsibilities in my new state affiliate.  She was particularly helpful in introducing me to the movers and shakers in both Arizona’s blindness community and its broader disability community at large, and, having a mutual passion for advocacy, we rapidly developed a close working and personal relationship.

In closing, it is with deep sadness that we mourn Barbara’s passing; yet, we fondly remember her many contributions to the Arizona Council of the Blind and to the cause of equal rights and full inclusion for all disabled people.