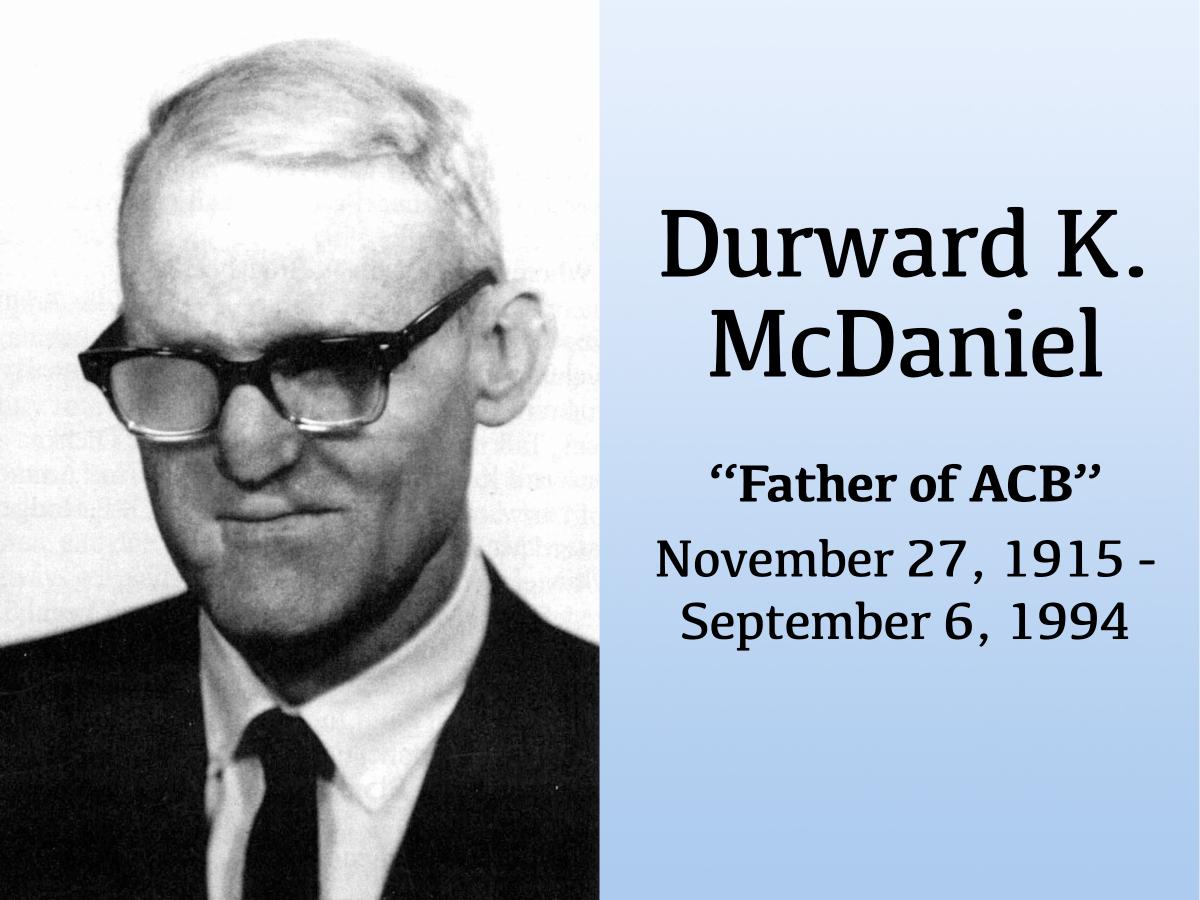 To be successful and command respect, a fledgling organization needs a guiding spirit, an organizer, a motivator and even a cheerleader. For the nascent American Council of the Blind six decades ago these roles were filled by a visually impaired attorney and visionary from Oklahoma, Durward K. McDaniel who made his initial imprint on the blindness movement by joining the July 1961 “march across the street” in Kansas City to found a new advocacy organization for the blind. In 1968, armed with an education from the Oklahoma School for the Blind, undergraduate and law degrees from the University of Oklahoma and 24 years private law practice, Durward and wife Aileen set out for Washington, D.C. with the vision of building an organization committed to the independence and social and economic welfare of all persons with visual impairments. Becoming the first National Representative of the American Council of the Blind, he quickly emerged as a vocal advocate for the blind and visually impaired. Little did he know that by the end of the century he would be regarded as an icon in the blindness community.

In the formative years, Durward’s activities were somewhat reminiscent of the legendary Johnny Appleseed as he traveled through the states sowing the seeds of awareness and advocacy while challenging his blind and visually impaired audiences to organize and demonstrate their collective strength as a homogeneous community. And he did not hesitate, when necessary, to deploy both his subtle and direct approaches, employing charm and friendly persuasion.  “It was,” remarked one observer, “like having your arm twisted but only feeling the pain later.”  Durward is remembered by those who were the objects of his lobbying as unfailingly persistent but never offensive.

Durward rarely passed up an opportunity to advocate for a variety of causes and on behalf of organizations representing the interests of all persons with disabilities. He testified before Senate and House committees and subcommittees on subjects ranging from national health insurance and the Randolph-Sheppard vendors program to the Wagner-O’Day Act, the Family Assistance Act and equal employment opportunities for the handicapped. He twice served on the National Industries for the Blind board and was legal counsel to the RSVA. After retiring from ACB, Durward sat on its board and represented the Texas Commission for the Blind in arbitration disputes. And he was admitted to practice before the United States Supreme Court. His organizational and advocacy skills are evident in the creation and operation of entities central to the interests of persons with disabilities, including establishing the first ACB national office, the American Coalition of Citizens with Disabilities, the American Association of Workers for the Blind, the National Education and Legal Defense Services (NELDS), numerous state and special-interest affiliates and the first credit union for the blind in the United States.

We honor not only Durward for his dedication and contributions over four decades but also his contemporaries at the local, state and national levels who stood with “The General,” as he was known, in voicing and defending the rights of and promoting opportunities for the blind and visually impaired. His legacy has touched the lives of so many people with vision and other disabilities. If only Durward were here today to witness the legacy he created.  How pleased he would be.