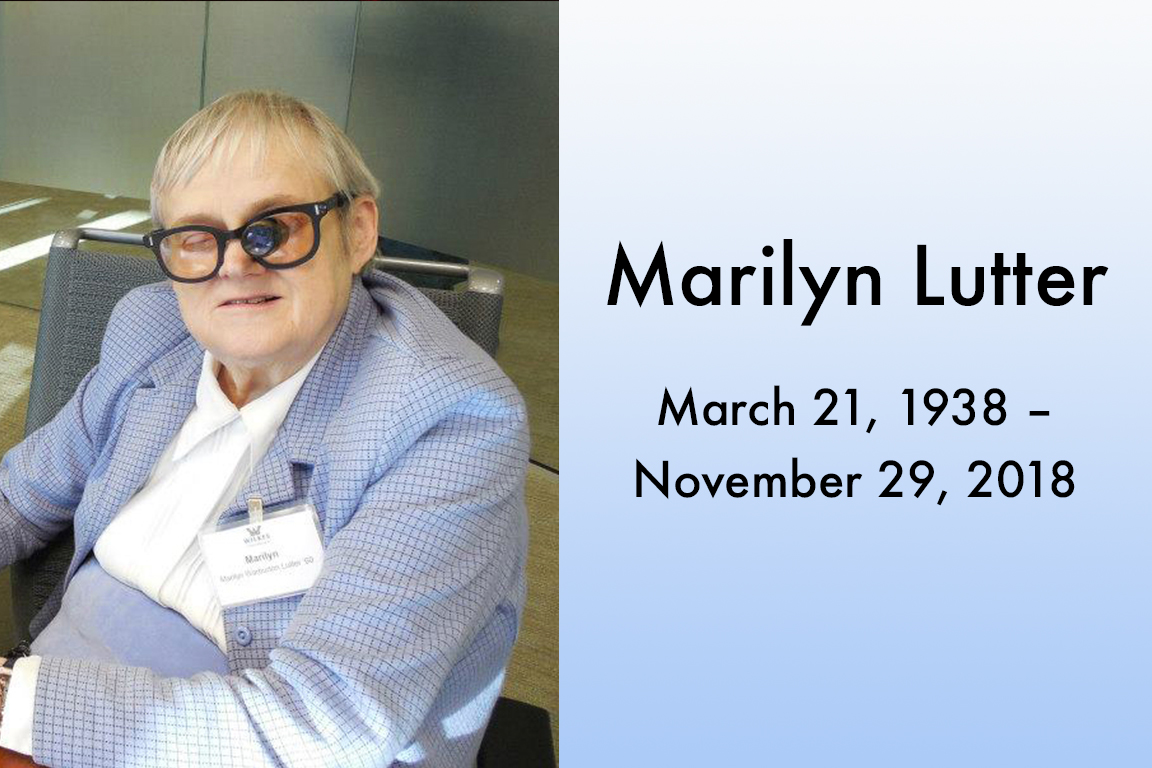 Marilyn Warburton Lutter passed away on November 29, 2018 in Washington, DC.

Marilyn was born in Towanda, PA, on March 21, 1938. Legally blind at birth, she attended the Overbrook School for the Blind in Philadelphia. She went on to obtain a Bachelor’s degree from Wilkes University in Wilkes-Barre, PA, and a Master in Social Work degree from the University of Pittsburgh

Upon completion of her degrees, Marilyn was employed as a social worker for over thirty years. Her career included work with an adoption service in the Scranton, PA, area and at the Moss Rehabilitation Hospital in Philadelphia, PA. In 1977, Marilyn moved to Washington, DC, to become the Director of Social Services at the Hospital for Sick Children, a position she held until the 1990s.

Marilyn was an actively engaged with the National Association of Social Workers and its DC chapter. She was also a long-time member of the Board of Trustees at the Overbrook School for the Blind. In addition, Marilyn was closely involved with the American Council of the Blind and President Emeritus at the DC Council of the Blind, where she promoted programs to expand independence and opportunities for blind and visually-impaired people.

Marilyn’s civic-mindedness was strong. She was an ardent supporter of the Americans with Disabilities Act of 1990, and she worked to safeguard the anti-discrimination provisions contained in this legislation. She took on leadership roles at a number of local Washington, DC organizations including the Columbia Lighthouse for the Blind, the Council of Citizens with Low Vision, and the Washington Volunteer Readers for the Blind. Marilyn also collaborated closely with the DC Public Library and their Center for Accessibility, and she sat on committees at the Washington Metropolitan Area Transit Authority to improve Metrorail and Metrobus accessibility features.

Marilyn and her late husband Rudy, who was also blind, were great travelers. They routinely and confidently navigated their way around the District of Columbia on public transportation, and they frequently attended professional meetings and conferences across the United States. Their adventurous natures are best illustrated by the fact that they traveled together to all seven continents.

A memorial service and a gathering of family and friends was held at the Church of the Pilgrims located at 2201 P St NW, Washington, DC, at 10 am on Saturday January 5, 2019

Donations in memory of Marilyn Lutter may be made to the DC Council of the Blind (DCCB) by sending a check payable to DCCB to: