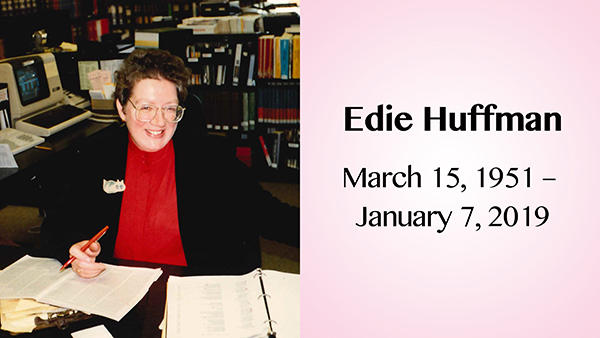 Edythe Lynn Simmons Huffman was born March 15, 1951 in Indianapolis, Indiana, and passed away in the same city on January 7, 2019.  She grew up in Starke County where her parents were school teachers.  She received her degree from Indiana University and her master’s in library science from the University of North Carolina. She met John Huffman at Indiana University and they were married in 1973.  She and John have one son, Marc.

Edie was passionate about many things and gave her time and talent in several areas. She loved crocheting and knitting, and when we attended meetings, she often did it while listening to speakers.  She made gifts for family and friends, and prayer shawls for sick friends. She was active in church and sang in the choir.

Edie was active in more than one organization. She was an active member of the National Library Association, and during her second stint at the Indiana State Library, her job brought her into frequent contact with other librarians and library administrators around the state. She made valuable contributions to the quality of public library services throughout Indiana.

She and John were active in ACB wherever they lived because of his career moves. She was secretary for several years of the state chapter of ACBI and volunteered wherever she was needed at national or state conventions. She was treasurer of the local chapter 151 of the National Active and Retired Federal Employees. She also served as treasurer for the ACB Government Employees.

Edie had many interests beyond her professional career. She was passionate about books and reading for their own sakes. After she retired, she took the audio description course at the ACB national convention. When our local chapter didn’t have a program, she would do a show for us so she could practice, she would say. We will miss her. Rest in peace, Edie.