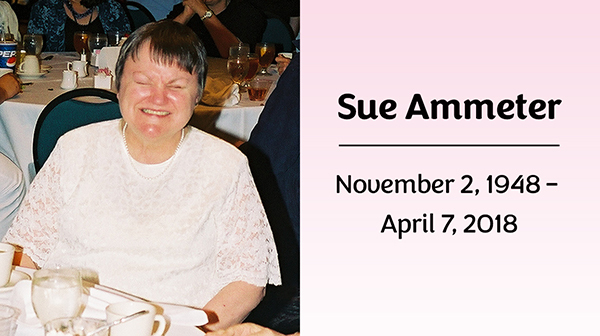 Sue Ammeter passed away in the early hours of April 7, 2018, due to complications from prior medical issues.

Sue was born in November 1948, in Bremerton, Washington. She attended the University of Washington and met and married her husband, John, in Seattle. He was her companion at many events, her driver, personal champion and “the wind beneath Sue’s feet.” Sue and John enjoyed many activities in life, including motorcycling, flying in John’s airplane, and much more. While Sue and John had no children, being dog lovers, they were the proud parents of many dogs during their 46 years together. They retired in Port Hadlock, Washington, near John’s family.

Even retirement did not slow Sue down.  She spent countless hours on the phone in conference calls every single month helping others, and continued to travel and participate in conventions around the country.

For 50-plus years, Sue daily demonstrated her steadfast commitment to raising the standard of life for blind people everywhere. She first became involved in the blindness movement when she attended a meeting of the newly formed youth group for the Washington State Association of the Blind (WSAB).  The very next year she was elected first vice president. WSAB was later to become the National Federation of the Blind of Washington, where she served as president. 1990 saw the merger of what was then the United Blind of Washington State with the Washington Council of the Blind, and Sue served as the first president of the newly merged Washington Council of the Blind.

Sue was the go-to girl when it came to advocacy issues in Washington State. Her knowledge of the ADA and other disability rights laws was invaluable to blind Washingtonians.

For more than 40 years, Sue led successful efforts to advance the rights and improve access and opportunities for people with disabilities in Washington State and nationally. In 1975, she was the first person with a disability to work for the Washington State Human Rights Commission, the only non-lawyer on that agency’s hearing tribunal. While working at the Washington Human Rights Commission, she was instrumental in drafting the rules establishing the right of people with disabilities to be free from discrimination in places of public accommodation. For three years she was the Washington state director for the national advocacy campaign that eventually won the passage of the Americans with Disabilities Act, and was later honored for that work with a Medal of Freedom Certificate from Justin Dart Jr., often called the father of the ADA. She served as the chair of the Washington State Governor’s Committee on Disability Issues and Employment, and was one of the founders of the Washington Coalition of Citizens with Disabilities, which is now a network of centers for independent living. She served on and chaired both the State Rehabilitation Council for the Washington State Department of Services for the Blind as well as the Patron Advisory Council of the Washington Talking Book and Braille Library. She was also actively serving on the board of the National Braille Press.

Sue was diagnosed with breast cancer in 2007, and looked extensively for information on treatment options. While undergoing breast cancer treatment herself, working with ACB and through structured negotiations, Sue, and other blind people impacted by cancer, convinced the American Cancer Society to provide their printed materials on breast cancer, its treatments, and coping skills in braille, large print, and audio format, and making its website more accessible.

She was a gifted listener, supportive mentor, compassionate friend, and remarkable advocate whose greatest talent was turning potential adversaries into allies and friends. There was never a challenge when it came to disabilities that Sue would not tackle and overcome. She definitely lived her life to the fullest and gave everything she had to advocating for the rights of blind people.